Employment hit a record high and joblessness stayed at a 43-year low in the three months to May, but earnings growth slowed as the labour market continued to confound convention.

The weakness in wage growth, which dipped from 2.6 per cent in April to a six-month low of 2.5 per cent, is unwelcome, but economists said that it was unlikely to deter the Bank of England from lifting interest rates next month.

Markets are pricing a 75 per cent chance of a quarter-point rise to 0.75 per cent in August, which would be the first time that rates have been above 0.5 per cent since March 2009.

Surging jobs growth has been one of the strongest features of Britain’s recovery since the financial crisis, but the wage growth that is meant to accompany low unemployment has yet to appear, baffling observers.

The number of people in work has risen by 137,000 since February to 32.4 million, with the employment rate hitting 75.7 per cent, the highest since comparable records began in 1971, the Office for National Statistics said. Unemployment fell by 12,000 to 1.41 million and the jobless rate remained at 4.2 per cent, its lowest since 1975.

There was little evidence of the jobs boom slowing. The number of vacancies, that is advertised jobs that need filling, was put at 824,000, up 7,000 and at a record high.

Tej Parikh, senior economist at the Institute of Directors, said that although the figures underscored the resilience of the labour market, “sub-par wage growth remains a sting in the tail”. He said that pay was struggling to keep pace with record levels of employment, in part because of heavy cost pressures and weak productivity growth. 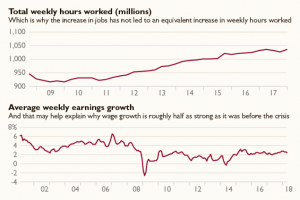 Ian Brinkley, acting chief economist at the Chartered Institute of Personnel and Development, said: “The labour market continues to deliver on jobs, but there are a number of underlying weaknesses.

“Much of the job growth has been for part-time work and, as a consequence, total hours worked in the economy have fallen slightly.”

The additional jobs were all full-time positions, but the ONS data showed that the average working week for full-time employees had been cut by 0.3 hours to 37 hours. Total hours worked fell by 300,000 to 1.03 billion between February and May. The drop may have been related to age.

“More than half of the quarterly increase in employment came via the 50 to 64-year-old age cohort,” George Buckley, an economist at Nomura, said.

The economy appears to be picking up after a slow first three months of the year because of the unusually cold weather. The Bank of England is now worried about the impact on inflation. Mark Carney, the governor, said this month that both the economy as a whole and pay were growing, as the Bank had forecast in May, smoothing the way for an August rate rise. Sir Jon Cunliffe, a deputy governor who opposed November’s rate rise, said last week that pay growth did not seem to be breaking out of its recent 2.5 per cent to 3 per cent range. The Bank’s projections suggest that wages will become inflationary above 3 per cent.

Victoria Clarke, at Investec, said that the Bank would “feel the need to move forward with gradual rate rises as it eyes a pick-up in domestically generated inflation”.